Even though it’s only been a little over three months, 100 consecutive days of dragon sketches seems like a lot. People would say to me, “Wow! I can’t believe you’ve done X (where X equals the number of days) dragons!,” when that wasn’t even really the case; as some of you might have noticed, there’s more than a few days of double-image posting.

Anyhow, I didn’t know what to do for the 100th consecutive D-A-D post, especially as I’m up to my armpits in preparing for holiday cheer. I didn’t have the time or energy to do something full-on color (to take it from a sketch to finish in a single day, along with all the other things I am doing at the moment would probably made me homicidal), so let’s start with a look back. All the way back to September 15, 2009 (that or thereabouts; the late-night postings throw off the days a bit): 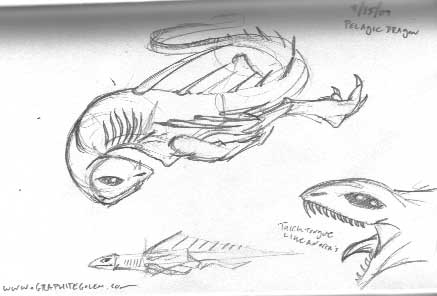 It’s hasty and kind of thrown together. I wasn’t as serious about this as I’ve become, so I didn’t give the creature much thought past how it might look and work. As you might remember, when I tried to redraw the Pelagic Dragon on Day 50, it turned out to be a Bad Drawing, and I kept messing up on it. (I also realize that “Pelagic” is not as much of an identifying term as I had originally assumed- it defines a very large area of the ocean; pretty much anything that most of us think of that lives in the sea is probably a pelagic creature.) If I had done this dragon today, it’d look something like this:

I (re)modeled it after a swordfish or a sailfish, basically a largish (swordfish are considerably larger than sailfish) open-ocean predator that moves very fast. This was actually my original thought, but I don’t think that I got it across in the first post. The limbs became a LOT smaller, as big, heavy arms and legs would only create drag. Since it doesn’t live terrifyingly deep like its benthic cousin, I kept the hindlimbs. It might not be graceful or fast on land, but it can get about somewhat. I think. I might have made the limbs too small.

Jumping ahead to the end of the first third of 100 days of Dragon-A-Day, would be a look at my personal dragon, hastily sketched in some downtime at Con on the Cob 2009. 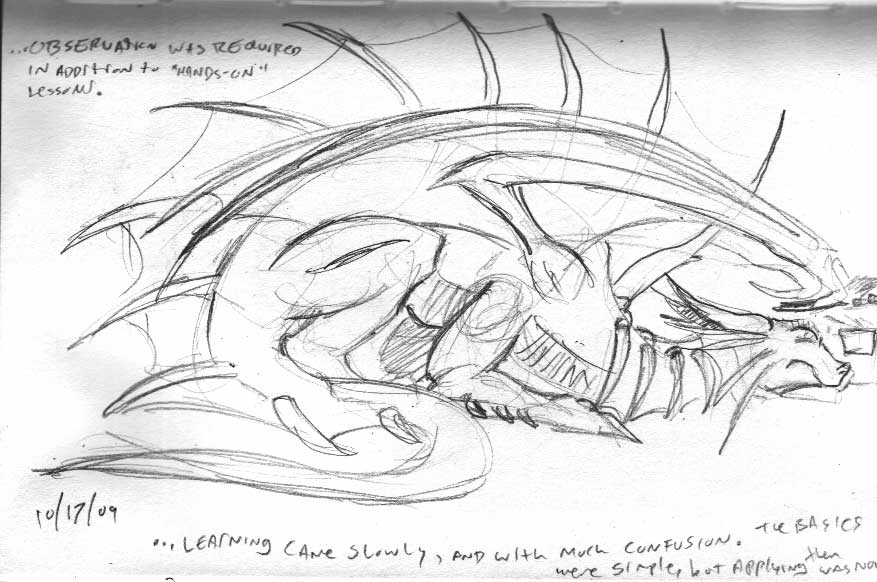 There isn’t much to say, as the dragon’s undergone a major overhaul over the last few weeks, and you can even see the layout sheet below. It’s probably changed a bit since then, especially with the anthropomorphizing I’ve done with him over the last few sketches, but in full-on dragon mode, he ought to look something like this: 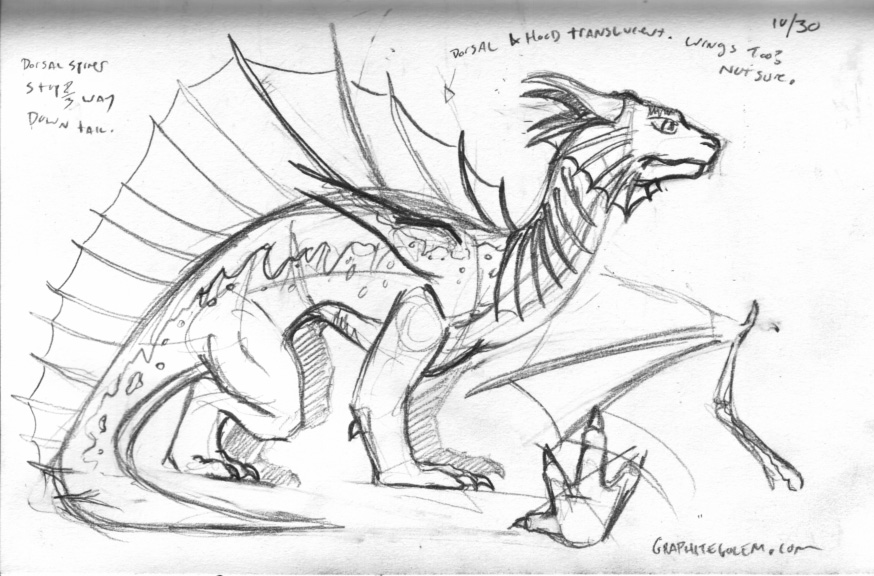 And in the spirit of the 100th post, here is another version of same. Now with something of a sense of scale: 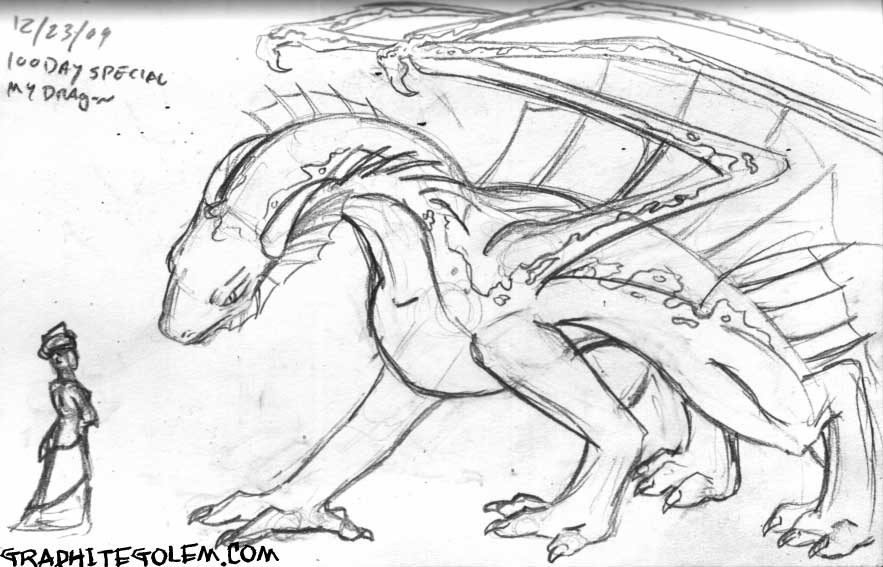 Working on this makes me want to take a long, hard look at animal feet. And maybe even do some studies. I’m not sure how on model he is in this, as well, but I like his posture. I’m still kind of on the fence about the translucency of the membranes in the hood, and sails. I think that they’re colored (especially the dorsal and neck sails; he might even be able to control the colors in them. I’m not sure yet), but I’m not sure if they’re opaque or not.

Skipping ahead to the two-thirds mark finds us with the wingshredder and some video game-inspired fan art for my good friend Lugo. 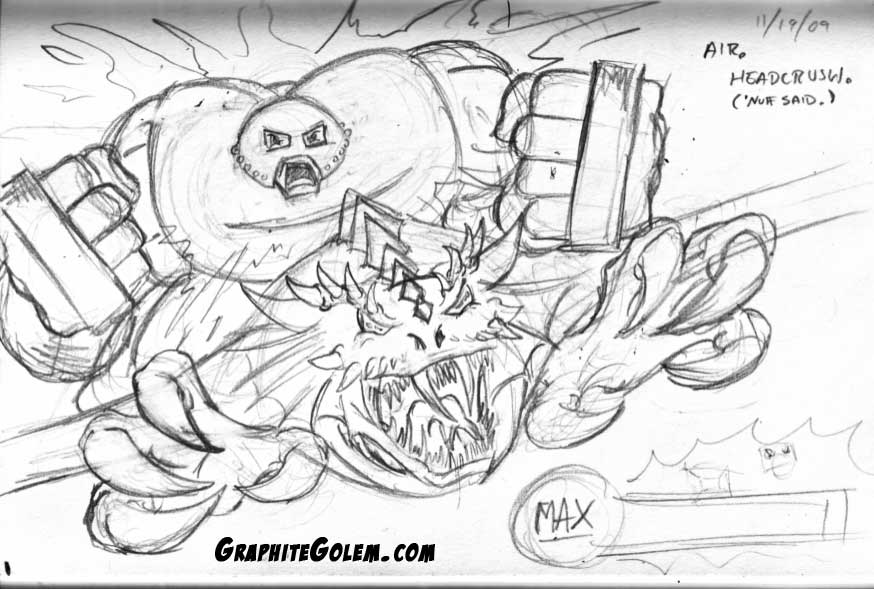 S’allright; it got the point across (if not the response I’d been hoping for for finally getting around to doing it), and if I were to do it again, I guess it’d look something like this: 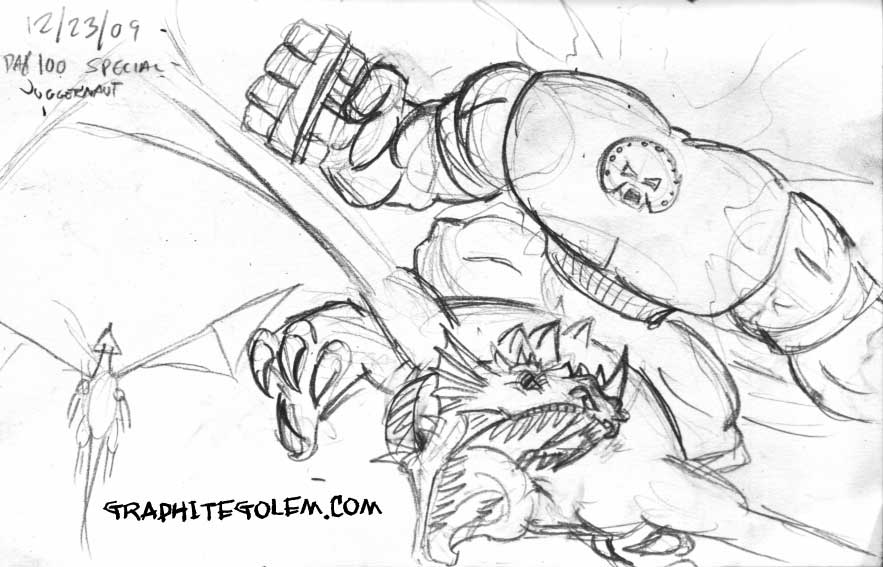 Once upon several months (and many, many sketches ago) I had had the idea that Juggernaut might be controlling the dragon by a chain in its nose. I almost used that here, then dropped it. For the sake of my sanity, I kept its head turned, because the head-on wasn’t working quite right.

And of course, you all saw Day 99 yesterday (or you scrolled down a bit to see it now), so I won’t go into that too much. I’m as content as I’m going to get with that sketch.

Some people, on the other hand, were really, really happy about it. kilmore posted his reaction to the sketch this evening:

“I love it XD. I’m gonna change my avatar tomorow! This is a great piece of work and just so you know my main color is red for my scales and a lighter shade of red for my wing membrane and spikes. I love the candy you really know how to make a unique and great piece of art. I’m looking forword to seeing the colors drawing! Lol I got all jittery when I went to the page after the link to your sketch of me that I had to run to my room from downstairs just to hide my exitment! You are truely a great artist!”

And that pretty much made my evening.