Got real ambitious tonight in the wake of the last two pen drawings. The girlfriend even said last night’s dragon was “breathtaking,” which made me pretty proud: 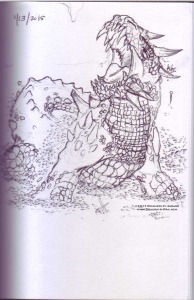 In addition to drawing a hoard of coins ala Desolation of Smaug, I tried to pattern the underbelly off of that strange not-quite-tiered, almost sweatery looking style that alligators seem to have. I thought I understood it at first, but then it started just looking bad, probably because I had made the scales large to fill space. Also, there’s not exactly a clean split of dorsal/ventral scales, there’s a vague transition or they might even just continue all the way around.

I didn’t know what I wanted to do with the head, and I vaguely regret not taking process photos, but I was too busy making the thing to stop and think of something like that. It was vaguely dinosaurish, with multiple lumps that could have been made into eye ridges, but I decided that I didn’t want it to have multiple eyes. The idea was that the dragon was waking up, so the eye needed to be half-closed, but I kind of feel like it’s a bit too muddled. Towads the end I wanted horns but couldn’t decide between Big Honkin’ Ones or multiple smaller ones to theoretically mirror the hornlets on the jaw. I’m still not sure I made exactly the right choice, especially with the angle of the head, but it works.

Anyhow, I need to wake up at some point myself, so that’s it for now. Thanks for stopping in!