Yesterday I had the random thought that I was doing some sort of elemental cycle with these ballpoint sketches; the first being Water, the second Air. I almost did something fiery last night, but did (ostensibly) Earth instead, which left Fire for today: 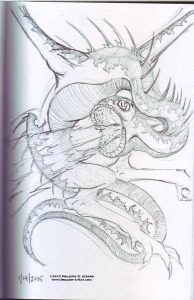 I ended up using two pens for this; I started it at work and stole a pen from a table there (I put it back), then finished it at home with one of my own, which created a few differences in tone, but I’m probably the only person who cares/notices that. In keeping with the other three, I kept the orientation vertical but had the odd idea of a long-necked firebreather, hence the slightly wonky and cramped neck.

Also, I wouldn’t normally draw translucent fire like that, but the jet of flame ended up being a bit crooked so it took up more space on the body than I planned, overlapping things I’d already drawn, so translucent it is.

Partway through I had the realization that I was drawing a self-sufficient Zippleback, which may or may not have influenced my decision to put a smallish, round head at the end of its neck. I took pains to get away from that though, and put lips on it, but then decided that fangs wouldn’t work, and changed to lampreylike inner teeth instead, which I actually like a lot.

This entry was posted in Dragon-A-Day, Online, Sketch and tagged breath weapon, dragon, How to Train Your Dragon, pens, teeth. Bookmark the permalink.