“dragon based off of an unusual breed of lizard”

So said the prompt at ArtPrompts.org while I idled at my desk waiting for customers to wander in. I know of a lot of lizard breeds, but never really considered any of them “unusual.”

So I let Google make that decision for me.

I eventually found myself looking at a Galapagos Land Iguana. Frilled and armadillo girded lizards also made a number of the “10 most weird/strange/whatever” lists (but somehow not this somewhat sensationalized list of “terrifying turtles and lizards“), but Darwin’s thoughts on the iguana made me look at it again:

Charles Darwin described the Galapagos land iguana as “ugly animals, of a yellowish orange beneath, and of a brownish-red colour above: from their low facial angle they have a singularly stupid appearance.”

And in all fairness, the land iguana is kind of dumpy-looking, thick-bodied and large-clawed. I actually got a bit wrapped up in preserving those qualities whilst drawing and probably didn’t make it as dragony as I might have: 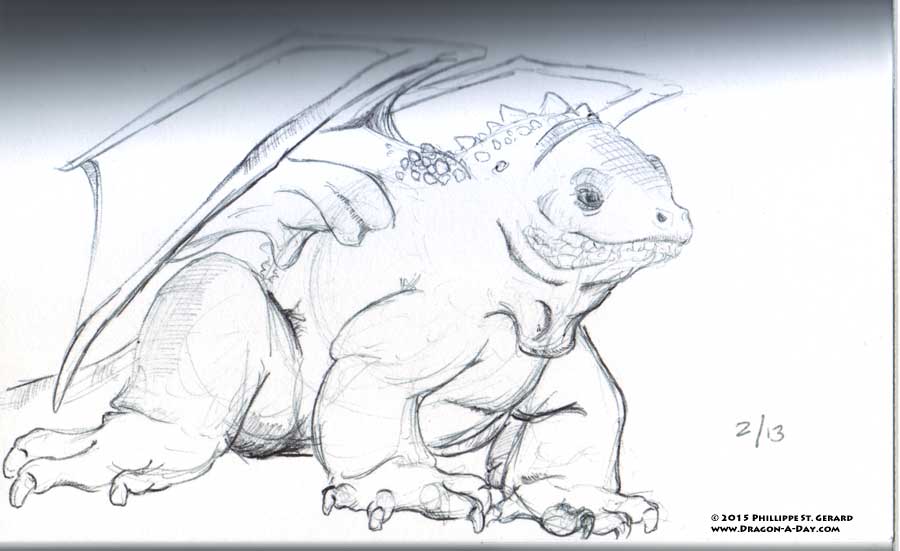 I mean, I basically changed the dorsal spikes a bit and put wings on it, ended up staying 3 hours later than I really intended to because everything goes wrong at 6.

This entry was posted in Dragon-A-Day, Online, Sketch and tagged dragon, other websites, pens, what makes a dragon, work. Bookmark the permalink.