I’ve been working a lot of odd hours lately, so I tried starting a sketch during one of the lulls at work. I kept chipping away at it (some of the lulls were longer than others) and didn’t actually do anything when I got home, which was good, because I was not in the mood to do anything with it: 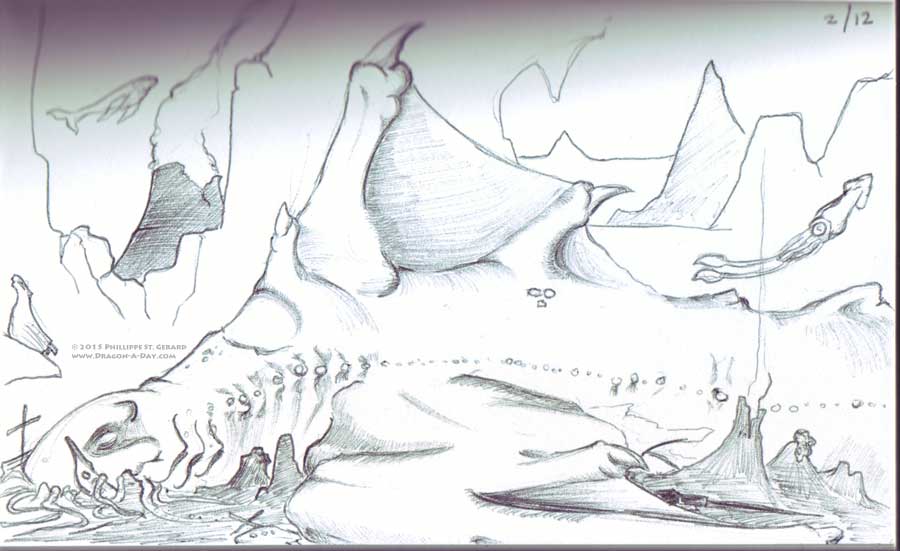 A sort of companion/precursor piece to this drawing from 2012, scale is still kind of an issue. The volcanoes were supposed to be big, but the whale and Architeuthis (sorry, I kept thinking that while deciding whether or not I should draw it) seem a bit too close in scale with the shipwrecks I scattered about, to say nothing about the volcanoes themselves- maybe they’re just steam vents. Not knowing anything about ships or such, they might even be close to scale, but the realization bugged me a bit.

Also, even though I had some more time to work on it, I honestly didn’t know what to do with it- I know I could have completely filled in the dragon with varying levels of shading, like I have before, but that didn’t seem right. As it is, it still looks good, and after taking my eyes off of it for several hours I feel good about it, but I still could have done more with it, I think, especially since I didn’t get to raise the lateral line all the way along the body- I got up to the shoulder joint then skipped ahead to the tail and left all the knobs in the middle stranded.