On the way home from my first game of 5th Edition D&D (wherein my Semitic paladin won a close battle for the Faith) I found myself without a functioning pen. After I got over the initial shock/annoyance, I decided that it was better to try and do a Good Pencil Drawing than wait the hour or so it would to get back to Brooklyn, trudge through the snow and then try to draw something. 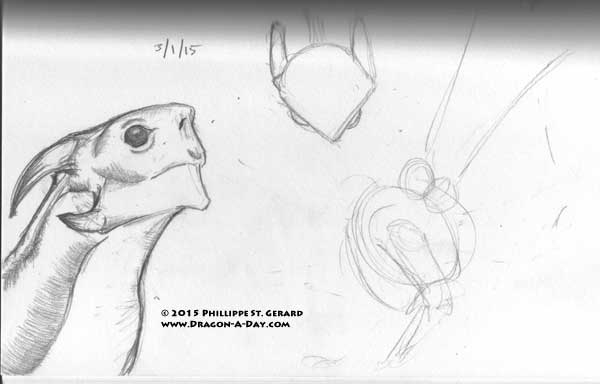 My pencil was softer than I thought it was, which made working on this a little difficult- for the past few weeks, I’ve been getting used to crawling all over the page without fear of damaging what I did with an errant pinky. To my credit, I didn’t actually smudge anything, and I also enjoyed the (relative) freedom of erasing, which was useful because at first I was wrestling with that old wedge-shaped head problem that I’ve been dealing with on and off over the last five years- this dragon’s head was intended to be kind of like a slice of cake in terms of how wedgy it is.