So my girlfriend and I made it to level 60 in Neverwinter this week.

She plays a Scourge Warlock and I’m a Guardian Fighter. We make a pretty good team. We were interested in going to the Well of Dragons, since it kept showing up, and we’ve been enjoying the dragon fighting parts, even when we lose.

So we spent some Astral Diamonds and got our gear up to the suggested levels, then went. We arrived just in time for the “Get to Tiamat’s Temple” alarm to go off just after we finished a conversation with Elminster and A Few Other Influential NPCs (we hadn’t done anything else at this point and weren’t 100% sure what to do).

Her: Hey, want to go get killed by Tiamat?
Me: Sure!

So we raced across the map to arrive with two minutes to spare. No one in the room said anything about strategy, and we were too busy quaffing potions and shuffling abilities around to really notice.

Then, the countdown finished and the encounter began. We, along with 19 others poured from the threshold into the encounter itself. It was a mufti-tiered encounter, with different targets and objectives. I’ve never done any endgame content of any MMO before, but  I must admit I was impressed with the scope and complexity of the thing- in a perfect world the mob of us would have had organization to the level of the plan in that one WoW raid you’ve probably heard of.

But even with such a plan, we probably would have failed to stop the dragon goddess from rising, and I’ll tell you why (briefly):

The Well of Dragons is utter chaos. Fun, frustrating chaos.

First there’s 5 guys and some bodyguards. Then there’s 5 clerics to protect, as they try to stop this from happening: 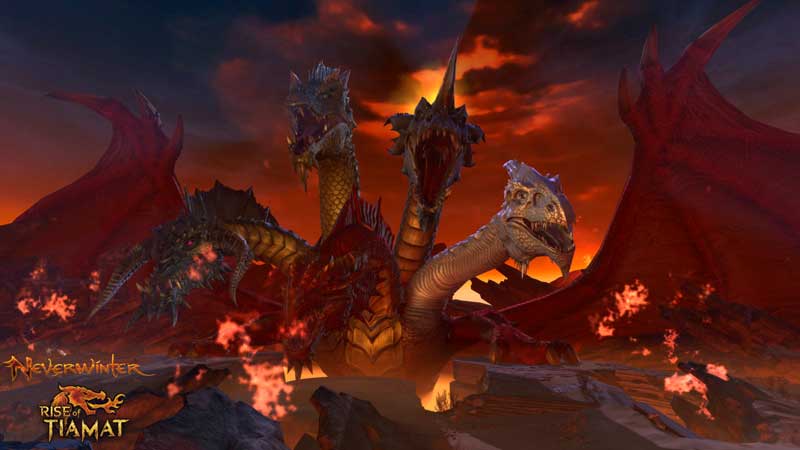 But they seem perfectly capable of protecting themselves from the GIANT MOBS OF DEVILS that literally fill your screen. Their health gets depleted, but they somehow get back up and keep fighting, despite the fact that they’re completely surrounded by devils that don’t even care that you’re dealing damage to them.

Oh, and Tiamat’s 5 heads are unleashing breath weapons the entire time. Sometimes you’ll get hit with dragonfear, too. If you survive all that, then you might get to actually attack Tiamat (assuming that leftover devils don’t turn on you and destroy you) but each of her heads has its own health bar, and is about six miles from anything. When you fail to defeat any of the heads quickly enough, the clerics must start casting again. Then more devils show up, lather, rinse, repeat for about half an hour.

We tried to stay together but kept getting separated in the tidal wave of devils, which is probably what would happen in a real fight of such proportions. We had a blast and can’t wait to get murdered by her and/or her minions again. 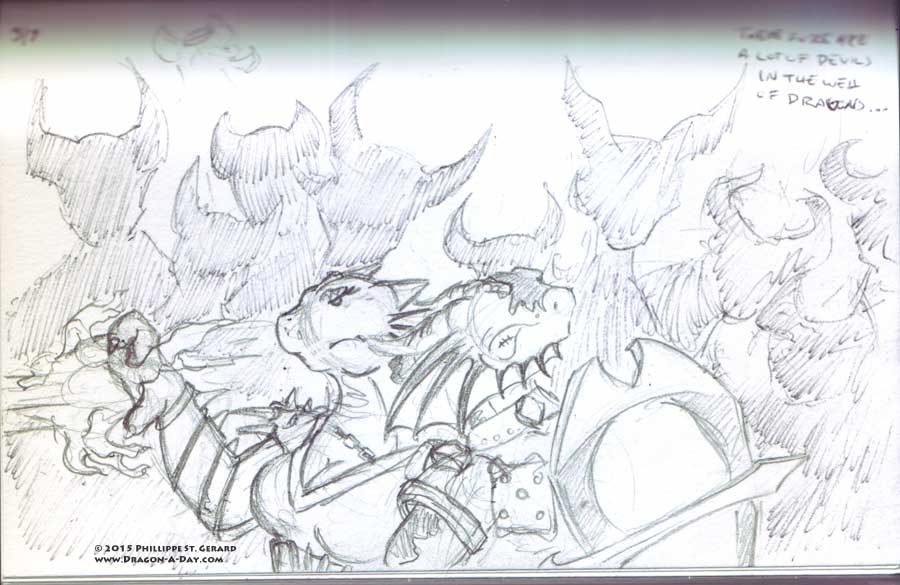 This entry was posted in Dragon-A-Day, Fan Art, gaming, Online, Sketch and tagged dragon, her dragon, my dragon, Neverwinter, Tiamat. Bookmark the permalink.