Dragon-A-Day: The Resurrection: Days 6-10: War of the Spark and Affairs of the Heart.

Technically, I’ve been missing in action, but since publishing anywhere aside from here hasn’t really been working at the moment, it’s probably all right.

Anyhow, this past weekend was the War of the Spark prerelease and I had it on my calendar to play way too much Magic: the Gathering in one weekend. In honor of this questionable decision, I did this rendition of everyone’s favorite planeswalking draconic villain, Nicol Bolas before heading out to the midnight event: 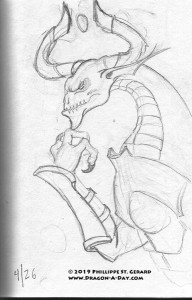 It’s hard to find good references for his armor, and I can’t get past his ridiculous gremlin face, but drawing him with anything else seems wrong. 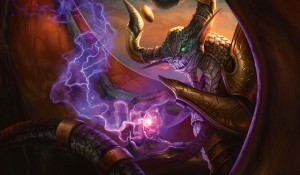 Day 2 of the Prerelease weekend was the culmination of an elaborate scheme that the Dragon God himself would probably be proud of, except that I lacked a zombie army and didn’t kill anyone.

With the help of the amazing people at Firefly Toys and Games, my Local Game Store, I was able to propose to my girlfriend in a suitably dramatic and nerdy fashion. Somewhere in the wee hours of the morning (inbetween rounds of the midnight event), I dashed off this sketch: 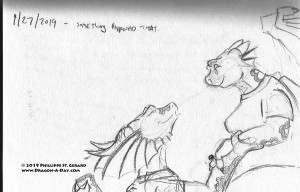 I like the tenderness of it, but I do wish that I’d been more awake and had the time to give it the proper polish that it deserved… like not forgetting her eyelashes. *winces*

Sunday saw nothing really special aside from some Indian food, but by the end of it I was pretty wiped out. After staring at a blank page for too long, I did some writing and found an unrelated dragon in the corner. 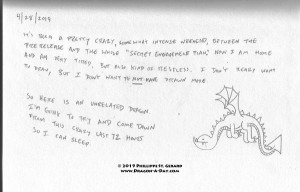 “It’s been a pretty crazy, somewhat intense weekend, between the prerelease ans the whole “secret engagement plan.” Now I am home and am very tired, but also kind of restless. I don’t really want to draw, but I don’t want to not have drawn more.

So here is an unrelated dragon. I’m going to try and come down from this crazy last 72 hours so I can sleep.”

Monday was supposed to be a day off. However, I forgot about several obligations and instead went to work late, kind of phoned it in and then got my eyes checked, which took way longer than I thought it would.

After dinner I thought I would be able to draw something but once again, all I could do was stare into the page hoping that something would fall out of it. After a few abortive attempts, eventually I gave up and drew a head with some scales on it. 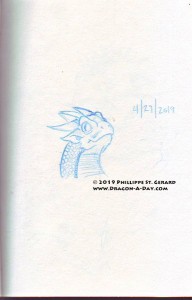 Today I got my day off, kind of. The engagement video made its way to the internet and my phone exploded as a result. I don’t feel rested really; I almost fell asleep twice while trying to play Diablo, but I have to return to the Real World tomorrow, like it or not, so that’s why we’re recapping today. 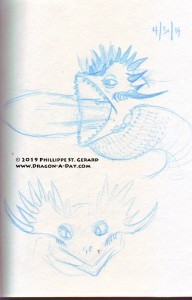 I got a little ambitious and did what was supposed to be a flared head but I didn’t know how to draw the far crest and faked it after trying to draw it from the front, but it just kept spreading wider and wider on paper and not looking like what it was in my mind’s eye.

3 Responses to Dragon-A-Day: The Resurrection: Days 6-10: War of the Spark and Affairs of the Heart.