Went to a class on basic electrical maintenance for the home. It wasn’t super-educational; the speaker was disorganized (one of my major pet peeves), the other attendees were busily pushing their own home improvement agendas, further derailing the speaker, and even the handouts were kind of crappy, poor photocopies and in some cases just copies of pages from books.

The lousy Smarch weather is also rearing its ugly head in Brooklyn tonight, gracing us with mixed snowshowers and thunderstorms. Loud, flashy thunderstorms.

So naturally, I started thinking of an electric dragon. 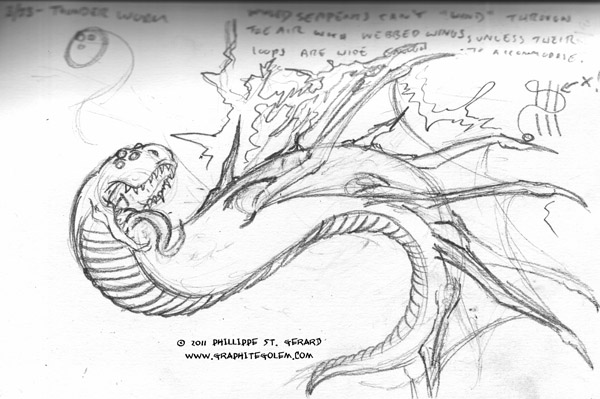 Originally, it was going to be a lot longer, and fly in a sidewinding sort of pattern, using those… wings (I know that there’s a name for the type of wing that it has, but I am blanking) in a rippling pattern. The claws at the end of the alars would be tipped with arcs of electricity, along wit the dorsal spines. It has three eyes, although it is almost blind, ala most real-world electric animals, and hunts using the electric field it generates.

I came to the realization that the sidewinding pattern would not work with the long alars that I was thinking of, unless the pattern was a lot wider- the coils tend to rest very close. And even then, it was getting too strange to draw, as the perspective was getting strange. So I edited it.

I do like the concept, and think that it bears returning to.