I started this a little earlier than usual (though other things kept me from posting this as soon as it was done), and as a result of my timely start on things, I was thinking about time, and the vague idea of a dragon somehow associated with time came to mind: 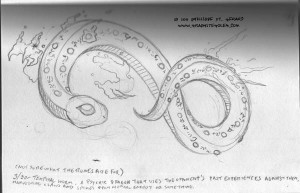 While I was drawing it, I realized that I am not very good at coming up with Strange Runes; many of the shapes and curlicues I used to make the markings between the nodules on the dragon’s flanks look too similar, which I suppose could be the point if it’s all the same language. I do like the concept of the dragon’s offensive bits, the claws and tail spikes, only existing when the dragon desires them to exist; I may revisit this again, but it seems to be pretty much done.

This entry was posted in Dragon-A-Day, Reboot, Sketch and tagged Temporal Wurm. Bookmark the permalink.