When does it stop being the reboot and become just another post? Hmm.

Anyhow, I took another stab at the Swift Ridgeback dragon (may change that to just “ridgeback” dragon, though I think I need to come up with a better ridge) from yesterday, mostly to see if I could standardize it. I also hadn’t drawn any hands or feet on it yesterday; I kind of wanted to try and figure out how they might look/work. 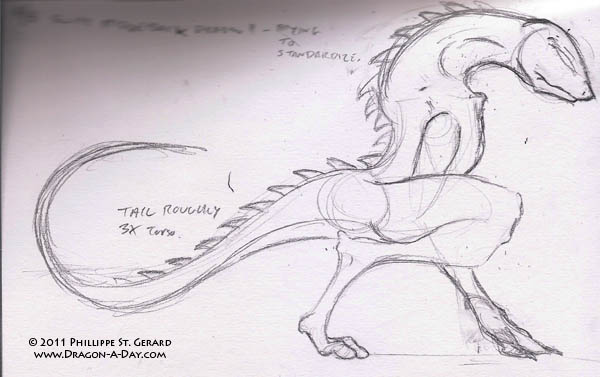 My first impulse was to make the fingers and toes long and delicate, but I kind of got tied up in the internal debate about whether this dragon even has thumbs (I didn’t really want it to end up any more anthropomorphized than it already is, with its almost human thigh/arm arrangement). Then I started wondering if it would actually be faster/more efficient to run on one’s fingertips, aside from the implied speed from the overall look of it.

I couldn’t convince myself to abandon the concept of “tip-walking,” mostly because I didn’t know what to replace it with. I need to look at paws and maybe even hoof structures to get a better hang of how this should work.

The head shape makes it look a lot more sinister. I’m not sure if I like that- narrow eyes and the mouth shape seem to be lining up for implied malevolence than I wanted. I need to get away from my usual conventions, although there’s something to be said for them… I dunno. This one is mostly there, but there’s a lot of minor things about it that I would like to do better. I just need to think about it more.