So once again, the Swift Ridgeback gets a face-lift, literally and figuratively: 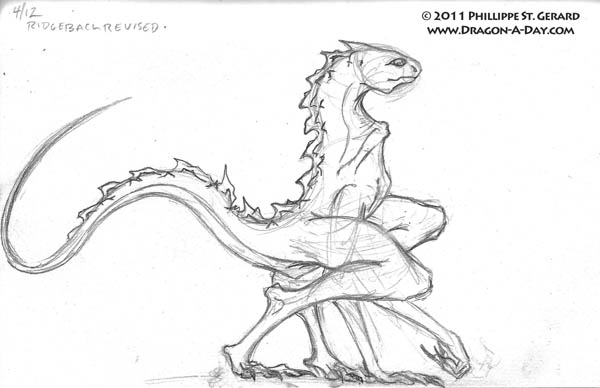 I’m still a little on the fence about the hands and feet, but after thinking about some of the very fast (or apparently fast; SCIENCE! says that it’s a mechanical thing, not a speed or divine powered thing) lizards there are out there in the Real World, and made the feet a little more lizard-y. Lizard toes have always kind of baffled me, as they’re so long and don’t really seem to do much for locomotion, or even gripping, as they rarely touch the ground aside from the clawed parts in many cases.

Anyhow, the neck is also a little shorter and the head a little smaller. I don’t know if this dragon is intelligent, but I’m leaning towards no (notice the lack of thumbs). The thighs are also a lot shorter, but it’ll never walk on its hindlegs- the feet are way too small for that.

I may come back to this once or twice more, but it’s definitely moving in the right direction.

And P.S.: I Googled  “Fastest lizard in the world,” and came across this interesting gem about the Black Iguana, which apparently can reach speeds up to almost 22mph.

This entry was posted in anatomy, Dragon-A-Day, Reboot and tagged ridgeback, SCIENCE!. Bookmark the permalink.