“Cute little fellow- awkward, helpless… I named him ‘Gorbash,’ in honor of the contest. Because it was rather gory, and I did get a bit bashed about…” *chuckles* “Get it? Gory? Bashed? Hence: Gorbash!”

–Sir Orrin Neville-Smythe, describing the dragon Gorbash pretty much immediately after the dragon had hatched, from the movie “The Flight of Dragons.”

“Hatchling” is a weird word.

Firefox’s spellchecker doesn’t recognize it; and about 4.35 seconds of looking its etymology up on Google returns very little (and much of what it does retrieve is actually about other words).

Nevertheless, the word has been on my mind for a little while. While attempting to satisfy my curiosity, I inadvertently discovered that humans can apparently have hatchlings, too. Ignoring the mammalian messiness for a moment, what would/could the hatching process be like for a dragon? In a lot of contemporary fiction (Anne McCaffery’s Pern series immediately comes to mind, though it is far from the only example), the average intelligent dragon is capable of some sort of intellectual expression within hours, if not moments of its emergence into the airy world.

Understanding that to be true, (as far as conjecture based on prevailing trends in fiction can really go) how would such a long-lived (and longer-memoried) creature look back upon the struggles that made up its first few minutes/hours/days (few, if any have explored the toughness of draconic eggshells, but it’s reasonable to assume that they are at least a little sturdy, even if that makes it harder for the tenant) of its life?

It stands to reason that this could be a major driving force behind the (archetypal) draconic personality traits like arrogance, aloofness, and preference for solitude- the realization that (aside from the obvious contributions of genetic material) one’s own personal power is the sole reason that one even exists could lead to a slightly overinflated sense of self-worth.

I wonder if this can be applied to other intelligent reptilian or egg-laying species, though I am inclined to doubt it, as they would have to be as intelligent and long lived as dragons are for the experience of hatching to have such a profound effect on their racial outlook. 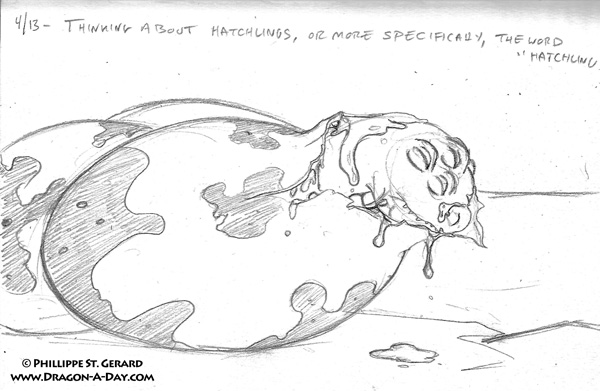 Editor’s Note: This was a miscellaneous dragon until I decided partway through to make it into a Thunder Wurm. It was a lot cuter before it ended up with six eyes.

This entry was posted in Dragon-A-Day, philosophy, Reboot and tagged hatchling, Thunder Wurm, too many eyes. Bookmark the permalink.