I’m away from my lair and without a scanner. My camera’s batteries seem to have crapped out, so instead, you get Lousy Cellphone Pictures until I can get fresh batteries. I’ll probably edit this explanation out once I get them, but for the 11 or so of you out there actively paying attention to the blog, that’s your explanation.

Anyhow: I was going through the old posts, mostly to clean up the snarl of categories and tags that were left over from the blog dot graphitegolem dot com days when I realized that there were some not quite holes in my…

Some other five-dollar word starting with “M?”

Whatever it is, the realization that I came to was that naming conventions like “Venomous Sailback Dragon,” that is, [descriptor] [name] would indicate that there is more than one kind of Sailback Dragon, and the venomous kind is different because it is venomous, whereas other Sailback dragons are not.

However, in all the time between Then and Now, I never even thought of another Sailback Dragon. I intend to fix that somewhat. 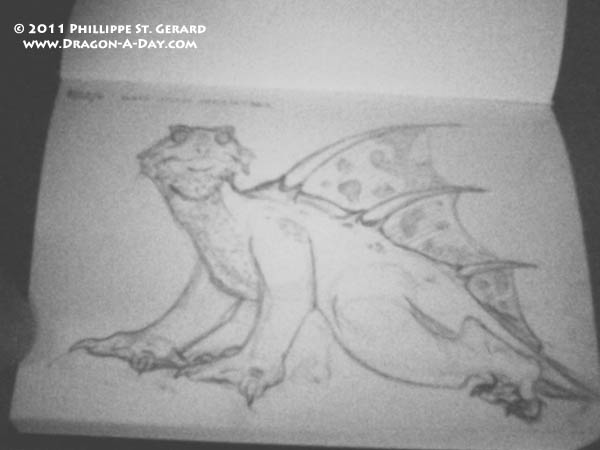 See? I told you it was lousy.

I had at first wanted it to have lizardlike splayed toes on its hind feet, but I couldn’t figure out how that would help such an apparently bulky creature get around in the marsh. Also, the other Sailback has only two toes on its hind feet as well. If I had paid more attention, I’d probably have realized that the Venomous Sailback has only two forefingers as well, but it’s late. It’d also have made drawing the hands a lot simpler, too.

And no, I don’t know where that last leg is. I’m also not exactly sure how its hind legs move when it walks. It probably doesn’t lift its legs that high, more like a kick-sliding gait,where its legs push backward, then come forward to that resting position.

Edit: I scanned the original, so you could see it better: 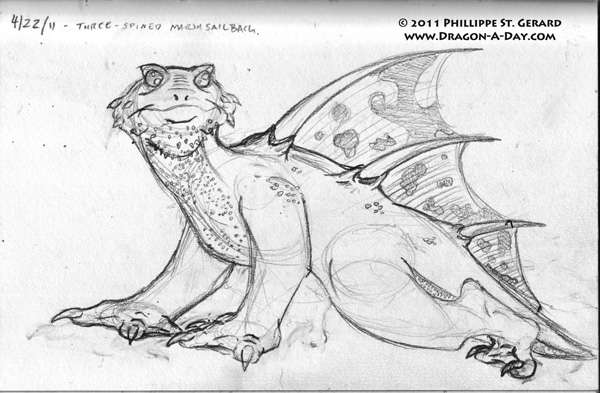 This entry was posted in anatomy, Dragon-A-Day, Online, personal and tagged sailback. Bookmark the permalink.