Tonight’s dragon is for my sister, who has been mildly obsessed with the feline characteristics of the dragons in That Movie With the Vikings. She sent me the following text this evening:

Know you’re most likely busy… But I wanted to place an order for a cat-like dragon. (I will want a copy when done)

Now, if we’re strictly speaking about anatomy, not only do the bulk of modern Western-style dragons (i.e.: 99% of the dragons in this blog) have anatomy based on cat body shapes, I’ve done this before on a furrier level as well. If it was a dragon that acted like a cat, (i.e.: the dragons in the aforementioned movie) then I suppose that it might be different, but based on the message I got and my understanding of the motivations behind it, I was inclined to think the latter was the case: 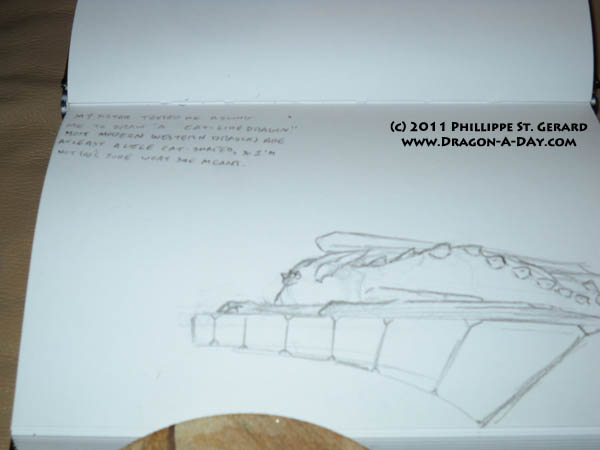 We’ve switched from Lousy Cell Phone Photos to Actual Digital Photos- a step up, but still not quite there.

I probably could have used a better reference, but my heart wasn’t totally in it, since I didn’t quite know what I was doing and I’m really rather tired today. Subsequent texts revealed that the request was for an actual cat/dragon hybrid, which is a different thing entirely, so I guess that it doesn’t matter overmuch.

I will probably pick it up again sometime next week. Hopefully I’ll be able to take some time on Easter Sunday and get some painting done, but I’m not certain.