It seems like there’s really no pleasing some people. After looking at the last few days’ drawings, my sister’s verdict was:

“I like it but I don’t love it. I think you may be thinking too much cat and too much domesticated short hair… Cuz [sic] the wings don’t really fit the body; it looks like a cat with wings, not a winged-cat.
I was not expecting anything in particular, but I just remembered this image [see below] … Consider a rendition of this cat with larger wings, dragon feet, the horns and ears, and a long spirally tail… Or whatever the image and my suggestions provoke.” 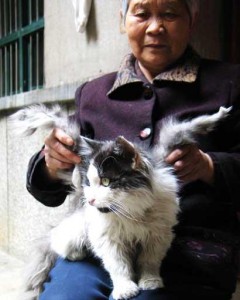 I’m a little confused by the message and its art direction, as you might have guessed. The creature that she’s suggested I come up with sounds like it would be even more patchwork than the catlike dragon from yesterday’s post, or would be even more “too much cat,” considering that it’s (now) supposed to be a rendition of this cat.

I don’t know; I’m going to let it rest, because I don’t have any idea what to do with it.

Anyhow, since I don’t know what to do with that one, I may as well move on to something where I have more creative license. No new Sailback dragons have come to mind, so instead we turn to the Random Word Generator (Plus) for inspiration, because that’s what it’s supposed to do. 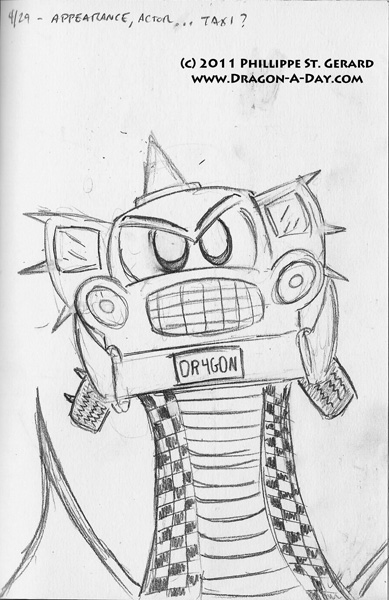 I’m actually surprised about how this came out. It’s got a sort of 1940s feel to it, like Popeye should be punching it in the face for threatening Olive Oyl, or it should be trying to eat the Katzenjammer Kids or something along those lines.

It also looks like a distant cousin to Truckasaurus (or Robosaurus, if you want to be technical about it). I’m not entirely thrilled with the headlights; I couldn’t figure out how to make them look like headlights and nostrils at the same time, but it’ll keep.