Some of my favorite pieces that I’ve made in this exercise are the ones that were inspired by outside events, particularly reader feedback. I love the ability to respond to another’s ideas with ideas of my own.

For example, a discussion about the cuteness (and a bit of the “catness”) of this dragon led to the creation of Firepuff the Hospitaler Dragon, a dragon who although getting mocked by the other dragons for wearing a scarf, burns off their “dragon eyebrows.” (He predates the Annoyed Dragon.)

Them: i kinda sort of want to get a firepuff tattoo in a year or so. would you be into redesigning him with me, working on a color scheme and all that? he’s your baby, after all.

Me: :O
I’d be flattered. More than flattered, really.

Them: well.. i have always wanted a dragon tattoo.. and there’s no better dragon than firepuff.

Me: That’s going in the blog.

So with that on my mind, I did this: 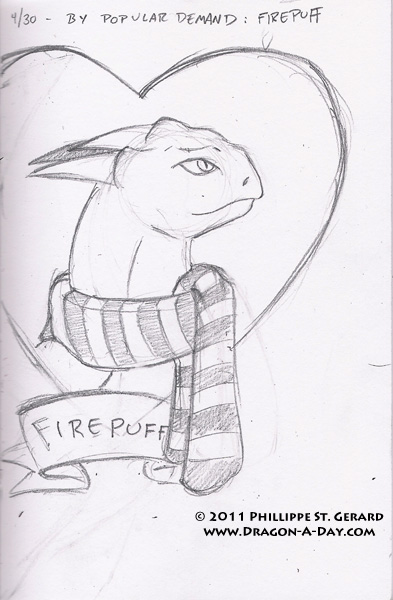 And that’s pretty much that… for now.

Right now, I need to be a Responsible Adult and go to bed before I am tempted to stay up the rest of the night and play League of Legends. G’night people.