I wanted to do something new, even different today.

While working on this, I found myself pondering the Rule of Cool problems I touched on last night… and promptly ignored them: 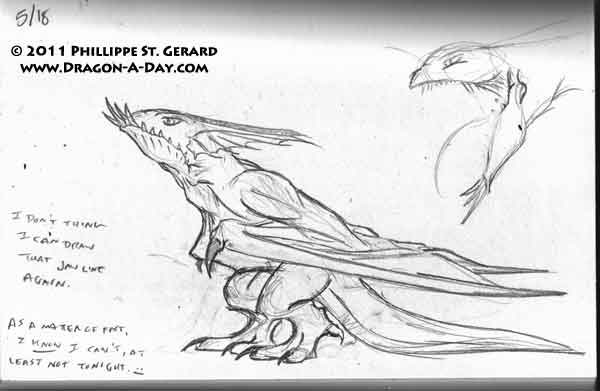 I don’t think I can draw that jawline again. As a matter of fact, I know I can’t, at least not tonight. :/

I’m not sure where that mildly ridiculous jaw came from, or how in the world there could be enough musculature to support it without some sort of marvel of engineering as far as cheekbones go. I like the birdlike posture, though the ears make it a little more gargoyle-ish or goblin-y. I’ll have to fix that and see if I can standardize (as well as rationalize) the line of the mouth in the coming days; those jutting lower teeth might get the axe too, though I like them. I think that they add character to the dragon’s face.

That’s all for now; this week is flying by, but it’s not over yet.

This entry was posted in anatomy, Dragon-A-Day, Online, Sketch and tagged deepjaw, Rule of Cool. Bookmark the permalink.