So remember that Pulverizer Dragon I started working on a few weeks ago? You remember it, the one with the helmet? The one based on a rhino?

Well, that’s just as well, as I’ve redesigned it a fair bit, and written some flavor text.

Why do we call ’em “pulverizers?” well, the ones that are out in the wilds, they’ll run up on something -or someone- that they don’t like, and strike them with the knobbly bits on their noses there…

I was all set to draw the helmet, and even started Googling around for “animal helmets” and barding, when I remembered that it’s easy to draw a piece of clothing badly if you’ve got no idea what the clothing is sitting on.

So I decided that I needed to draw the head itself first. Which then led to the question: Why does it have such a massive helmet in the first place, and if it’s naturally inclined to run headfirst at things, or at the very least headbutt them, why would it need one?

It’s not a pretty way to fight, but it’ll bring down one of those snotty War Dragons in a hurry, let me tell you. We probably never would have started with the helmets- they don’t like them much, you know- if they hadn’t started using chain and plate. We’ve tried to get them to wear armor of some kind as well, but they refuse, and I don’t much blame them.

Give me back the days when it were just man to man and dragon against dragon. War has done too much thinking for my liking, and hopefully for yours too.

Figureing out what the head was going to look like was harder than I thought it’d be because of the evolutionary/functional issues involved. I leaned very heavily on the rhinoceros influence, and decided that it would rely on scent and hearing more than sight (hence the very large ear hole and flicking tongue), and I’m not entirely sure how the helmet stays on, although I think that it’d probably have some sort of padding inside that creates a snug fit or something. 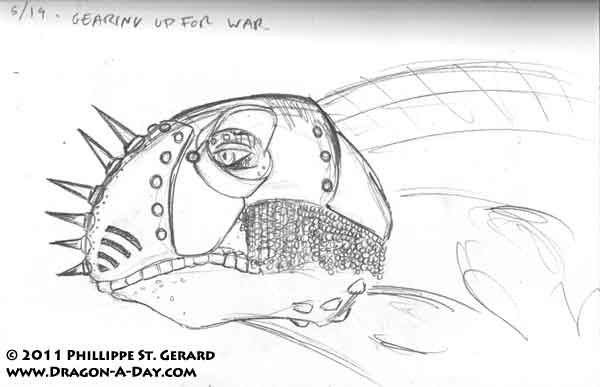 The chainmail jingles something awful, but it’s better for them than plate over their ears- with that, they can’t hardly hear a thing, y’see, and a Pulverizer who can’t hear is a Pulverizer that can’t defend itself. But if you’ve got Pulverizers in your line, chances are pret-ty good that you’re not sneaking up on too much…