I took another stab at the Deepjaw Drake (well, its confounding jawline and anatomy of such) today. 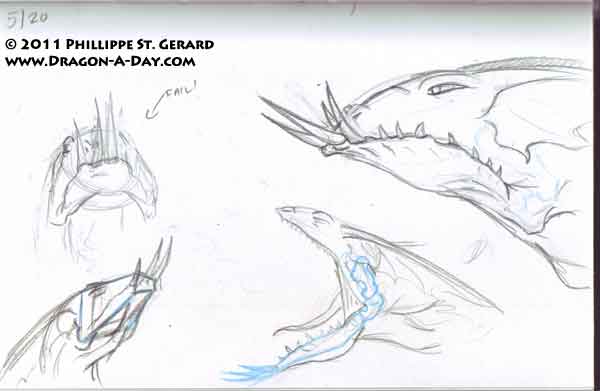 The jaw hinge construction is very similar to my Leviathan sketches from two years ago (as well as the ones I did last year and never got around to uploading- maybe I’ll do that in honor of the Rapture kerfluffle ending on Sunday.), but that makes a lot of sense, as it also has a double-wide jaw for swallowing whales.

I’m still on the fence about the tusky lower jaw, perhaps it’s because I made the eyes so beady in the sketch at right, but it looks a bit rat- or pig-like, and I don’t like that. I’m also still trying to figure out what role those teeth would play, aside from Being Awesome. There’s no way that it could use them for biting, positioned the way that they are at the very end of the face there; the upper jaw wouldn’t even be able to provide pressure on them if they were to make contact with prey.

Don’t get me wrong, I really like them. I just don’t know if they’re appropriate or useful. I’ma go think on this. You guys have a great weekend.

And in other news, let’s all have a moment of silence for Macho Man Randy Savage, who died in a car accident today.

This entry was posted in anatomy, Dragon-A-Day, Online, Sketch and tagged deepjaw, Rule of Cool. Bookmark the permalink.