This is something that i’d wanted to do for a little while, but I was not sure how to proceed. So after a longish evening of errands and more errands following a morning of TCB (i finally found someone to give me stuff for other stuff, at least for a little while- it happened kind of suddenly and I forgot to tell you), I sat down and tried to tackle another dragon in my neglected draconity queue. 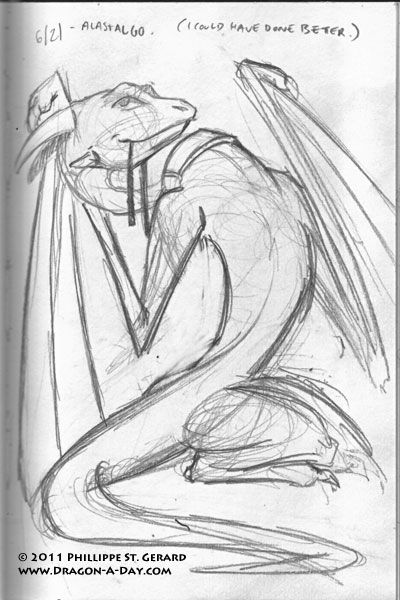 Style (Eastern, Western, Anthro, ophidian, other): western
Relative size and build: long and skinny
Horns (number, style, curvature, relative length): 2 long ones ending relatively pointy, 2 short ones that end blunt
wings (include number of wing-fingers, if possible): About average for a dragon, except that the most outer wingshafts are a lot longer than the rest
Accouterments (back spikes, head frills, beard): Nope.avi
Demeanor or common activities: Submissive, playful dragon

The reference images he’d provided had the dragon collared high on the neck, like around the chin, which I didn’t like, so I moved the collar lower on the neck, where it’d be easier to control the dragon, I think.

Anyhoo, the thing that kept me from doing this earlier was that I was never quite sure of what the dragon ought to be doing. A simple enough problem, and one that I should have been able to solve easily enough, but I never really did.

I wanted to do something with that long body, largish wingspan and of course, the neck/collar, but had a devil of a time tying it together while putting the dragon in something of a playful pose, like the “offering the leash” pose above. As it is, I’m not sure if I succeeded. I’m pretty sure that I broke his neck with that mildly contorted pose, and the placement of the feet really annoys me, but I killed that darling too many times to not have something to show for it, and I need to get up and TCB again tomorrow.

This entry was posted in damnit, Dragon-A-Day, Online, personal, Sketch and tagged draconity, stuff for other stuff. Bookmark the permalink.