So after a mildly harrowing day of stuff, I didn’t really feel like drawing, at least not anything that I was supposed to tonight. So instead of flubbing something from the draconity queue (I really didn’t feel like drawing anything), I turned to the old random word generator.

A few cycles in, (which included “wage,” “obligation,” and “eye”) the generator spat back “mount.” The initial reaction was “meh. World of Warcraft has this already,” and while I’m sure that I could have put my own spin on it, I didn’t feel like it.

So instead I tried taking a stab at another definition of the word: 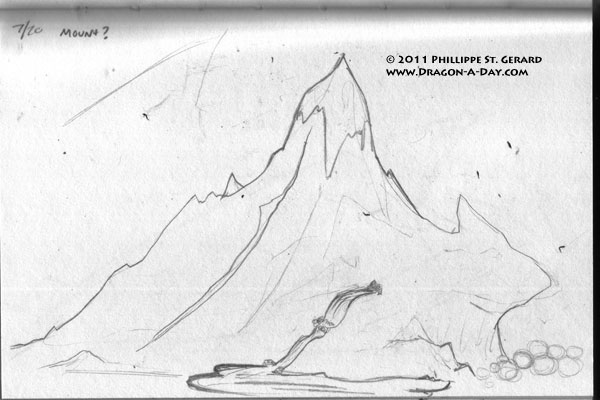 I’ll be the first to tell you that I’m not the best scenic artist. It probably also didn’t help that I didn’t really know what I was doing, nor was I that interested in doing it. I also was trying to draw a dragon-mountain without drawing a dragon made of rock, because I’ve done that several times already. It is vaguely draconic, though.

So I tried again. 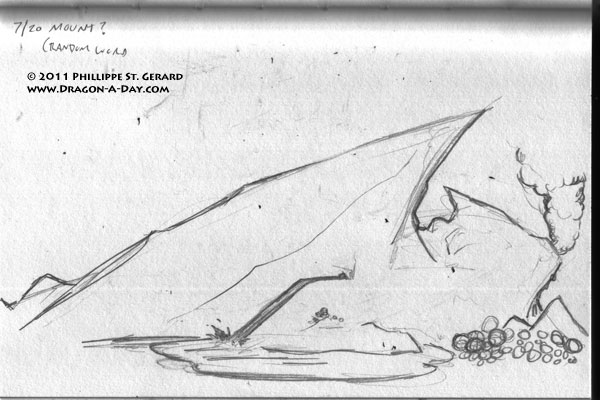 This was closer to what I should have been doing in the first place. In the fantasy series The Tales of Kolmar (better known as Song in the Silence, The Lesser Kindred and Redeeming the Lost), there is a mountain on Dragon Isle (the place where all the dragons live, if you hadn’t guessed) the inhabitants call “The Grandfather,” due to its resemblance to a dragon at rest, if I recall correctly, and thinking of that helped me make this drawing at least a little more draconic than the first. It’s by no means perfect; I’ve never been terribly interested in drawing scenery, even when it’s the focus of the piece, and that’s something I need to start to remedy when my attention span is a little greater.