There are still a few dragons kicking around in my draconity queue, which is just as well, because I don’t feel like making anything up tonight, though an Annoyed Dragon would have sufficed for today. 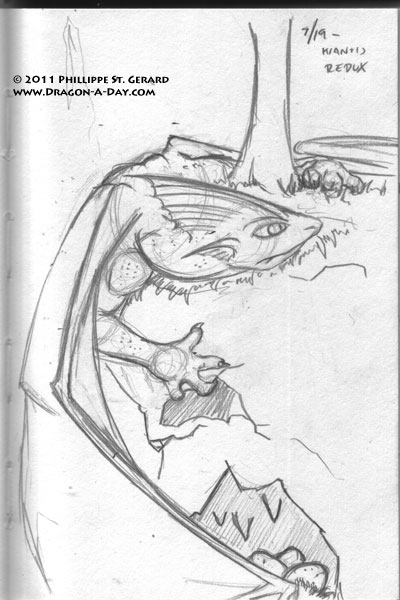 This is Kiantis. He actually commissioned me sometime last year to do sketches of his dragon when it was still just a concept rattling around in his head, and I was happy to help him realize it. He originally wrote (and I believe that English is not his first language, so be gentle, dear reader):

-anthro dragon – appearence seems male, but it’s actually genderless
-basic bones anatomy is actually human, with few exceptions:
-Scales: all over around – generally small ones
-Hands: only three fingers + thumb, which makes them thicker and stronger than four
-Feets: longer than normal (x2) with still three fingers, and another one in the heel, feets also used for gripping purposes. Stands on toes.
-Head: snout is quite cuneus – it’s basically reptilian but also
point-like for aereodinamics – maybe a mix between avian/reptilian? i never understood the real shape.
-Still on head: No horns or spykes, nowere in the body. But has
earfins, And a crest (made like the earfins) that starts from the
front and stops after the wings-shoulders. The crest leans backwards (and used for flying stability).
-Wings: quite wide, when closed they’re as tall as the body, or even more. three fingers on the wings.
-Tail: again quite long, maybe as tall as the body (but this maybe less). Vertical crest in the end (on top) but quite small, used for flying direction.
-Some measurements: the body is about 1.70m tall, tail could be 1.50 long. Wingspan is quite long, around 8 meters.
-Keywords: agility/speed: not only phisically, but also mentally.
-Habits/Attitudes: flying/climbing/running on top forest trees. Hides between the environment when not moving.

There was a bit of back-and-forth about the run/hide/intelligent nature of the dragon, if I recall correctly. so this time around, I decided that instead of hiding only itself, the dragon might be hiding something of value. I’m not sure of the coloring, but I figure there are some greens and browns or maybe a (greyish green) in it that would make flattening oneself against a grassy cliff face somewhat viable.

This entry was posted in Dragon-A-Day, Online, Sketch and tagged draconity. Bookmark the permalink.