It’s still Ungodly Hot out, but I was far more hydrated today and dealt with it better, despite walking around in the mid-to late afternoon way more than I ought to have been. (drinking about a pint and a half of water more or less each half hour helped immensely)

The heat was an oppressive, cloying thing; even as the sun began to set, the ground and other inanimate objects began to relieve themselves of all the heat energy that they had been soaking up since early this morning, which, in its own way, actually felt a little more stifling because of the fact that the floor was hot, along with the walls, the chairs and everything else.

I did manage to while away the last few hours before the blessed (albeit somewhat humid to the point of near-damp) darkness settled in within the cool embrace of air conditioning, which made trudging back out into the stuffy night a little rougher.

While sitting at my drawing table with the box fan going at full blast, I thought of the Heatwave Dragon I had wanted to draw last night, and wondered about it. At first, I really really wanted it to be able to fly for some reason, with wings that looked a bit too light for its size (it just drifts on the hot air currents that its own body generates), but then discarded the idea after remembering how the heat just seemed to surround and actually come off of the ground more than down from some smug dragon drifting in the wake of its own nefariousness.

So with that in mind, I did this: 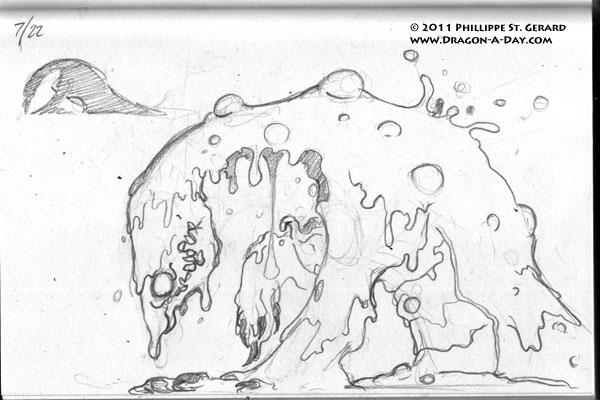 I’m not sure what it’s made of; the other catastrophic dragons I’ve done so far were at least partially composed of their primary elemental schtick- the Earthquake Dragon is made of rocks, the Wildfire Dragon has his wings of fire, the Blizzard Dragon is composed of ice, etc. “Heat,” while reminiscent of fire, is not nearly the same thing, so I opted for the dragon to be melting and reforming under the stress of keeping its catastrophic heatwave energy inside itself, as it bubbles and drips malevolently.  I probably should have given it a pupil or something to differentiate its eye from the bubbles on the surface, but it read enough to me at the time.

This entry was posted in Dragon-A-Day, Online, Sketch and tagged amorphous, catastrophic, heatwave. Bookmark the permalink.