Two of my friends (who are both Chinese) got married this afternoon, so I felt compelled to make this: 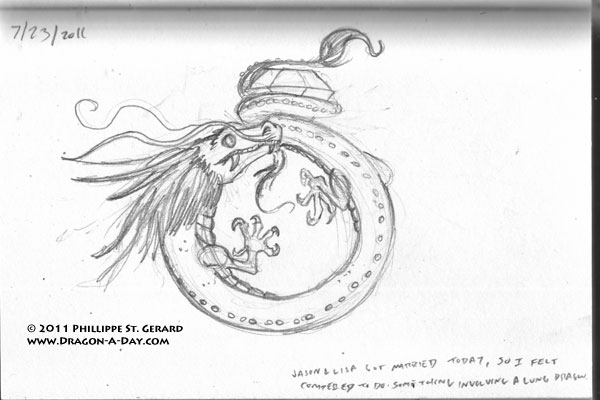 I’m never really that confident when drawing an Eastern-style dragon (specifically the Chinese lung–I have never been called upon, nor felt moved to depict one of the Japanese dragons, which are similar, but different; partially because some of the folklore surrounding them came from China, if I understand the history correctly, and other Asian wyrms simply escape me. My apologies to the rest of that continent); I always feel like I’m doing it wrong somehow.

Oddly enough, I felt a little more confident tonight, but I still felt that I wasn’t quite there. I think it’s because that there are specific (implied) rules about how the dragon is supposed to look and symbolism attached to each of its parts, but I’m not familiar enough with them to feel like I can push those particular boundaries.