While coming up with today’s dragon, I was first going to start messing with proportions- I was going to do something along the lines of a “Greatjaw Dragon,” with jaws like a gharial or maybe a Spinosaur.

But then I began considering what sort of adaptation that would actually be, and why a creature that can fly and breathe fire would need a long set of jaws in the first place, which led to some thoughts on the draconic diet in general, as well as the disposition of a dragon: 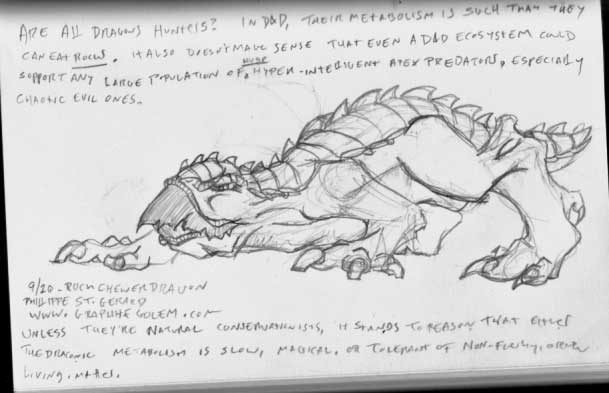 Are all dragons hunters? In D&D, their metabolism is such that they can eat rocks. It also doesn’t make sense that even a D&D ecosystem could support any large population of large, hyper-intelligent apex predators, especially chaotic evil ones.

Unless they’re natural conservationists, it stands to reason that either the draconic metabolism is slow, magical or tolerant of non-fleshy or even [non-] living matter.

I’m really happy with the way that it came out. Its lips might not be quite right, but I didn’t want it to just have a beak- It’s clearly a modification of the teeth, to suit its mineral-based diet. Its low-slung posture suits it for living underground, or perhaps moving slowly topside, where foes (perhaps humanoids trying to harvest its bones, which would probably be very dense) would be presented with its plated back and bony jaws, rather than its leathery, relatively soft bits.

I’m not sure why it’s sneaking, maybe it’s about to steal a shipment of basalt or something. Mmmm, smoky igneous rock flavors.