Not every dragon featured in this experiment will fill a particular evolutionary/ecological niche.

Some of them will just want to kick. Your. Ass. 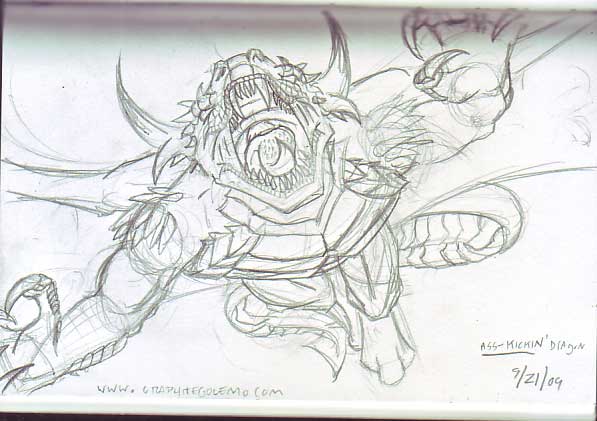 At the end of the day, it’s important to remember that, barring any sudden paleontological breakthrough, the (Western-style) dragon served a particular purpose- it is a foe to fight, a monster to fear. It is the embodiment of destruction; some of the oldest (western-style) dragons poisoned water and killed crops simply by being in the vicinity of settled lands; these creatures did not even breathe fire, which might have cleansed the taint that they brought; instead they exhaled foulness and venom.

We have since tamed the beast by endowing it with (or remembering that it had) benevolence and greater-than-animal intellect, but the dragon is still a chief among monsters, our fear since transmuted to awe.

This entry was posted in Dragon-A-Day, philosophy, Sketch and tagged ass-kickin', what makes a dragon. Bookmark the permalink.