A dear friend of mine gave birth over the weekend. For some reason, this slipped my mind. Then I saw the pictures on Facebook this afternoon, and it blew my mind. There’s a lot more that I could say on that subject, but that’s all that really needs to be said. 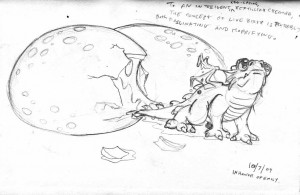 I had originally wanted the hatchling (and why doesn’t Firefox know that that’s a word?) to be looking up at the viewer, but the angle was wonky. As it is, the eyes are hyuuuumongous- bigger than I realized they would be, and probably too big to be reasonably called “cute”- I guess they grow into them.

There should probably be more albumen in the scene; just assume that the ‘ling is coated with it. I made the dorsal scales soft and floppy, although that might not be right. The claws probably ought to be sharp, too, but I was caught partway between cuteness and babyness, with real-life reptile anatomy somewhere as a distant third, perhaps fourth, which is why there’s no yolk sac attached to the little dragon either, like how E.E. Knight describes in Dragon Champion as the hatchlings battle for the egg shelf.

I also wanted to mention Thorarinn Gunnarson’s live-birthing, breastfeeding faerie dragons at some point in this post, because I was thinking about dragons and babies and all, and the first book in the series deals with a pregnant dragon, but I am too tired right now to come up with a proper segue.

This entry was posted in Dragon-A-Day, personal, Sketch and tagged Birthday, hatchling. Bookmark the permalink.