It’s Ash wednesday[sic], and if i learned anything from Matthew McConaughey as TECHNO VIKING in 2002’s post apocalyptic dragon hunting blockbuster “Reign of Fire” [link added for clarity]; is that dragons LURVE ASH. FEEL THE EXCITEMENT!

So I discovered that this is a thing today.

It actually makes a lot of sense; if you consider Randy Savage’s song “Speaking From the Heart,” the line

“Soaring with the eagles and slithering with the snakes; I have been everywhere in between, I am your friend; I am the Macho Man, Randy Savage.”

succinctly and accurately describes draconic characteristics- the capability of flight as well as reptilian traits. Perhaps, as some have suggested, Randy Savage was taken from us before his time, for a reason. Perhaps that reason was ascension to full-fledged dragonhood.

Sadly, we shall never know.

In any event, after drawing these conclusions, I felt that I could do nothing but an actual Macho Man Dragon (because however well-intentioned, the “dragon” from Skyrim is actually a wyvern or drake.)

So therefore, we have the following questions:

So while ruminating on this and killing a lot of darlings, some other stuff happened and it’s now rather late. As a result, I found out that my circadian rhythms are coming back to where they ought to be, for I got very tired around 10:30 or so. While this is surely good news in the long run, it’s more than a little vexing, because I have no dragon, and certainly no Macho Man Dragon (seeing as I don’t know what to do with it yet).

I also don’t have a whole lot of time to sit here and puzzle it out, even if I weren’t wracked by fatigue; I have to catch a bus in approximately eight-and-a-half hours at the time I am writing this (I was going to tell you that I’ll be out of town for a day or so, and not to panic if I don’t post anything).

So, with that in mind, here is a draconic version of the Gobbeldy Gooker. 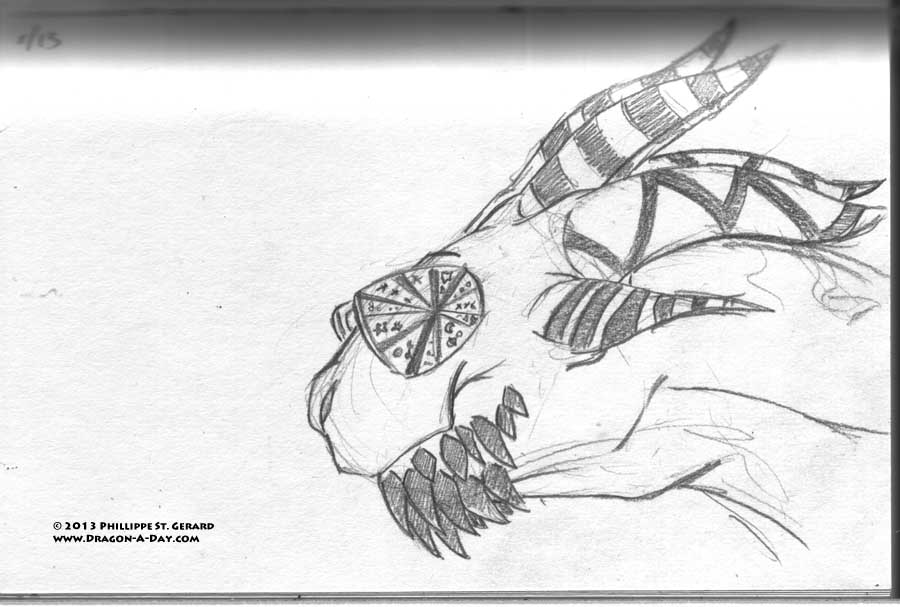 Clearly, there is a lot more ground to cover; the sunglasses are kind of not there yet, but I kind of like the horns and spiky beard.