So I decided that while I might not have all the time I might have wanted for that contest, I figured that there was really no way that I could run this site and not at least make a nominal effort to throw my hat in its general direction.

Therefore, the next few days will likely be dedicated to the [descriptor] Marsh Dragon. Right now, I’m thinking “frilled,” (though my first thought was “spotted,” which reminded me too much of a certain sailback dragon of nearly 2 years -omg!- ago.) 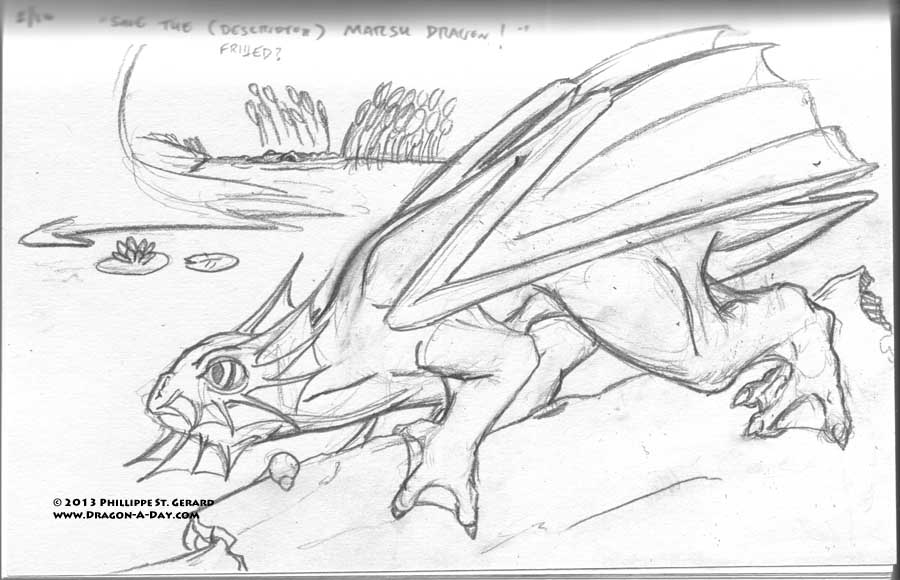 It’s still a smallish, mostly inoffensive dragon probably the size of a smallish housecat, but (hopefully) more suited for a particular environment. I had wanted the hindlegs to be more like a climbing tree frog’s, but the result wasn’t looking very “dragony,” and the contest’s guidelines seemed to imply that this creature needed to be immediately obvious as a dragon at first glance.

The Dragon – Create a cool dragon and show me that you know dragons. Show me the emotional resonance that comes with a dragon. Capture the “essence” of a dragon, and breath some life into it.

Granted, I’ve been having that particular argument with myself for years now, but I’m sure that the ranks of the competition will be STUFFED with Photoshop-painted scaly hexapods of catlike build, and I don’t really feel like shooting myself in the foot any worse than I have to. Playing against type doesn’t seem like the best idea here, sadly.

This entry was posted in anatomy, Dragon-A-Day, Online, Sketch and tagged aquatic, artorder, contest, marsh dragon, what makes a dragon. Bookmark the permalink.