“The hardest part is getting the dragon on his back”
-I don’t remember the name of the character, but it’s from the “Make Way For Dragons” series. I told you them books stuff was crazy.

Now that’s out of my system:

One of the other characters I had considered making for the Hero Star*Guard campaign I made the space squid for yesterday was a moose with arms. Not an anthropomorphic moose, a moose. 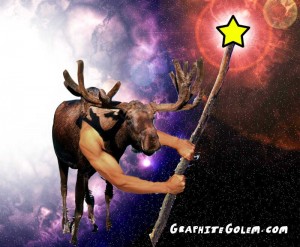 And no other special powers.

When I was pitching my alien ideas, it came down to the moose and the squid. The squid won, though the moose was a lot funnier. No one understood what I meant until I explained that the creatures “were like Trogdor.” Hilarity, and “consummate V” jokes ensued.

So on that note, here is today’s dragon: 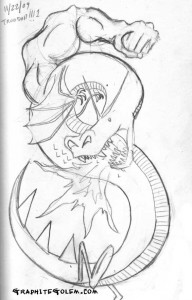