(According to Wikipedia, “pride” is a collective noun for peacocks as well as lions. Go figure.)

There are a a few proud birds- Peacocks, eagles, even a restaurant. So it makes some sense that the dragon of Pride would become more birdlike under a bit of scrutiny. I didn’t go the belly feather route, not yet anyway, but this still seems to be going well: 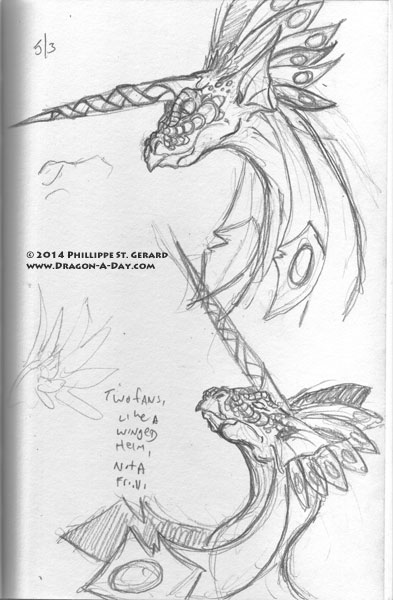 I think replacing the extra fins with two (or more) fans of feathers is a good idea. In my head, the fins would have been colorful, like a sailfish’s fin, but I don’t think it would have worked as well as I wanted it to. I feel like I should go look at pictures of Archeopteryx (and I am impressed that I spelled that right on the first try) or bird feet or something , because I’m kind of blanking on the scales-to-feathers transition.

While I was working on this, I found myself wondering why I was keeping the external ears, and why were they so big, relative to the rest of the head? I’m still not sure, though now it might just be to make Pride look a bit more dragony, especially with the beak, though it might just be a callback to the fins of yore.

I need to fix the shape of the head, though; the horn looks kind of like it’s sitting on the skull, not exactly growing from it… If I moved it to where the gem between the eyes was or changed the angle of it that might go a ways towards fixing it…