“I don’t know if Godzilla is a dragon per se, but I (finally) saw the new movie. I came home and drew this from my impressions of him. (He didn’t get nearly enough screen time)” 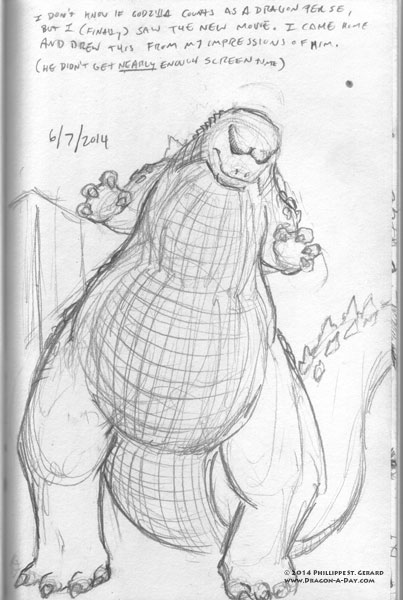 One of the first things I thought of when I started dredging my memory of the movie was a conversation I’d had some time last year and never really finished about Godzilla’s questionable draconic status. Considering the idea that the Eastern dragon is a composite of several creatures as well as (in some cases) something of a guardian spirit, and the Western dragon is a terrifying force of destruction, made the more so because of its poisonous and/or venomous nature (which a giant atomic-powered creature probably personifies perfectly), I would have to change my answer to “yes,” especially in light of the recent design update.

Plot elements aside, the film had the same visual problems that Pacific Rim had- why do kaiju only fight at night, in the rain, amidst swirling particle effects?

I initially drew this with stumpier feet, with the toes turned in. As it turns out, after I posted it, I went and found some other references and points of view, and I was right the first time.

This entry was posted in Dragon-A-Day, Fan Art, Online, Sketch and tagged dragon, Godzilla, Movies, what makes a dragon. Bookmark the permalink.