While watching the Tonys tonight with some friends, I idly sketched Godzilla again, this time looking at some references, because in my head he was pretty much just a big wall of dark gray rough-and-scaly patches, some soulful eyes, and a roar.

The handful of times that we got to see him move around, he had a lumbering gait that I loved, as well as the overall ponderousness of his actions, even when he fought, which was an interesting contrast to the somewhat more agile insectile MUTOs. Basically, he looked like a guy who would pick you up and throw you around in a barroom brawl, which is what Godzilla does. Looking back, I didn’t mind the fatness of Godzilla, either.

Speaking of animal influences, there’s a whole lot of alligator in the new Godzilla, as well as bear, and the large scales on the side of the neck hint delicately at him having gills, which my girlfriend thought he ought to have. 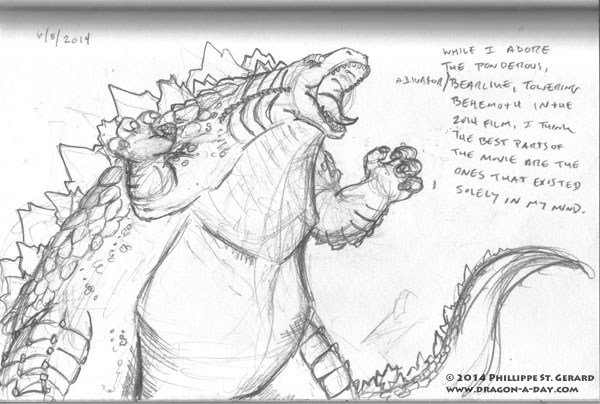 As others have pointed out more eloquently that I might have, there’s a lot of textural inconsistencies in the current Godzilla, which made it kind of annoying to draw, because I wanted to cover the whole body in scales but they just weren’t there. Like I said, rough patches… Looking at the old one made me wonder if they rubbed glue on the suit and rolled it around in grit to get that look.