For the most part, it hasn’t been a productive week. There were a few things that I got done, but I definitely failed to meet my own short-term projections. I’m not sure why I mentioned that; but i felt it worth talking about.

Anyways, after finishing the week with my desktop’s video card apparently exploding (it recovered on its own mysteriously), running around doing errands and Not What I Felt I Needed To Do, followed by a surprisingly frustrating round of Super Mario Wii, I came home and took a stab at the Blizzard Dragon. 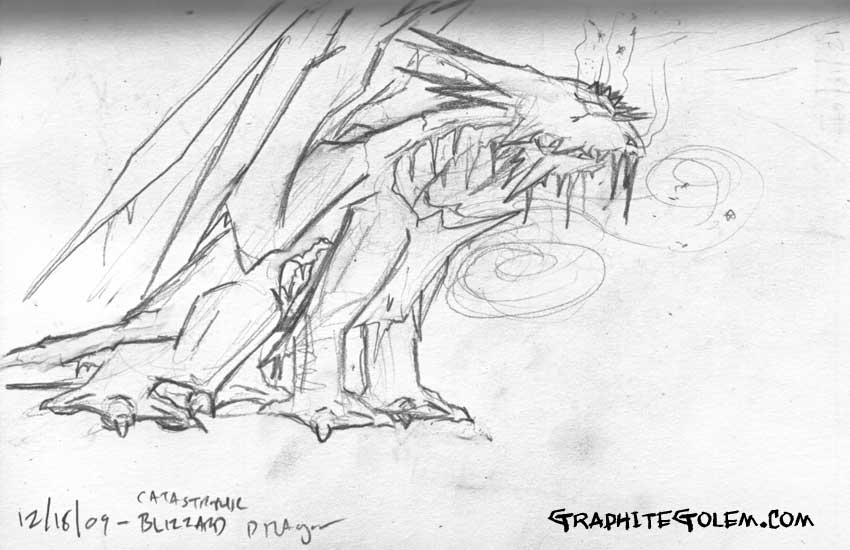 I kept the limbs solid, but the long forearms conceal most of the gaps in the trunk. I added a support of sorts in the center of the hollow areas to give it a sense of greater mass while retaining most of the hollowness that the first version had, but I’m not sure if it came across here. I wanted to put cracks or holes in the tail, but it wasn’t reading well. I do like the upright wing posture (although it was more vertical in my head), along with the large wingspan in general- it is a strong, but ergonomic flier, like a condor.

I’m sure there will be another round of these, but tonight I am strangely vexed and very tired. Good night, all.

This entry was posted in anatomy, Dragon-A-Day, Sketch and tagged blizzard, catastrophic, silhouette. Bookmark the permalink.