Appropriately enough, the day after I post the full-body sketch of the Blizzard Dragon, New York gets a big ol’ snowstorm. It’s ben snowing all day, and is even still snowing as I write this, and the drifts are pretty deep.

So with that in mind, I sat down to draw my daily dragon, and found myself thinking of a bit of dialogue:

“The ground shakes, and those who fly away, can, others seek shelter in sturdy places. Still others have nothing to fall on them, or are steady enough to withstand it.”
“Malady takes the weak and the old, while the young and the strong endure it.”
“I chill the air so that it hurts to breathe it, I freeze the ground and fill the skies with snow, yet they hunker down, find warmth, adapt, and endure.”
“If we are to kill them all, we must awaken all of our kin. Give them no chance to rest nor rebuild. The wake of the cataclysm spawned by our collective wrath will wake new brethren of ours, and thus perpetuate the vicious cycle.”

At first,I wanted to draw the three catastrophic dragons I’ve done so far, but I was too sleepy to put a composition together involving three such… busy creatures. So instead, I present to you the initial sketches for the Wildfire Dragon, one of several catastrophic dragons I was thinking about this week: 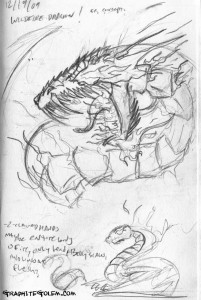 At the moment, it’s less like the others- its body seems to be “holding in” more than the others, who seem to be letting their catastrophic energy out. I like the flaming teeth a lot, as well as the beard of fire. (I’d have included a link to that Screwattack video about Top 10 beards, but I can’t find it, nor a decent picture of the flaming beard that Ares has in God of War. But it’s kind of neat) I’m not sure about the long neck either; I’m pretty sure that that was just the sketch getting away from me. Like I said, I’m sleepy and have some stuff on my mind, but I will come back to this, and the others in the days to come.

But for now, I am off to bed. Stay warm people.

This entry was posted in Dragon-A-Day, Sketch and tagged ass-kickin', catastrophic, wildfire. Bookmark the permalink.