I sat down and decided that the middle stage would be a sort of awkward one. Since it gets so long in its final form, especially compared to the proportions of the first stage, this made a lot of sense in my head: 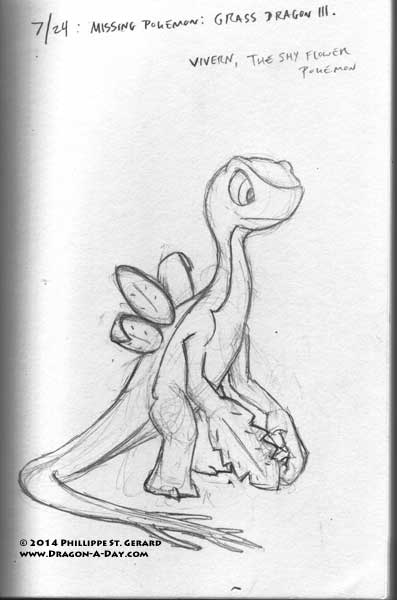 Because of the idea of it being kind of awkward- everything suddenly gets longer; the center of gravity is all over the place, that sort of thing, I made the posture more rigid than the other two. By Stage 3, it will have enough XP to make the transition to an even longer neck/tail without a problem. And those extra leaf-fingers are the things that it’s been waiting for its whole life.

In the end, I just threw out the neck petals, and left the blooms for the final stage. #handwaving

This entry was posted in Dragon-A-Day, Fan Art, Online, Sketch and tagged dragon, Pokemon, posture, what makes a dragon. Bookmark the permalink.