Due to the popularity of “fluffy death machines” from last night’s piece, I started poking around at the idea of cute cockatrice hatchlings. 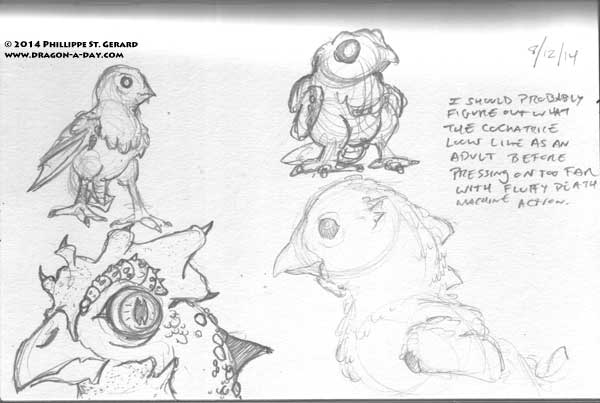 “I should probably figure out what the cockatrice looks like as an adult before pressing on too far with fluffy death machine action.”

Much like the Pokemon quandary from a few weeks ago, I realized that I need to figure out where I’m going before I can decide where to start. The not-quite limitless possibilities with a chicken-headed dragon make for some interesting design choices in its infancy.

I mean, the feathers can fall out and be replaced by scales and armor, but it should at least mildly look something like what it’s going to turn into, right? Then again, considering the strange metamorphosis that even the most mundane of chickens goes through, it might not be so necessary. However, I still feel like the cockatrice hatchling should at least resemble the adult somewhat, though I might be wrong- I need to do some more research on basilisk hatching and such. Some half-remembered legend tells me that there’s a chance that a cockatrice’s egg might sometimes produce an ordinary chicken, or perhaps starts with one.