A cockatrice’s hatching is probably something of a momentous occasion, considering the unlikely events that need to take place in order for it to actually happen- Cock (or sometimes a chicken, depending on who you’re asking) lays an egg, serpent or toad sits on egg, cockatrice emerges. From a strict legend perspective, it’s unclear if they breed true, but since they’re pretty hard to kill, they might, or even a pairing of cockatrices could produce a number of cockatrice hatchlings, along with toads, serpents and chickens.

With all that in mind, I decided two things: 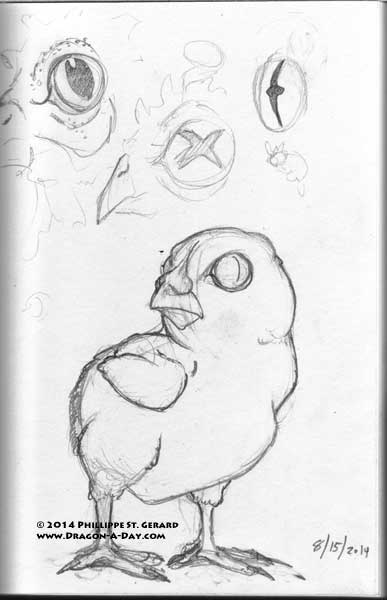 Baby chicks start off with nearly all-black eyes, then they grow up and seem to have colored irises. I’m not sure if that’s because they grow into their eyes as they age, but I decided to keep the chick’s eyes slitted and (only) somewhat menacing, before it grows up and develops its full suite of powers… maybe the gaze of a cockatrice chick is only enough to kill small insects and vermin.